This book review is not for the faint of heart nor for the weak stomached. Imagine: You’re out for a stroll in Victorian London, prepossessed with the styles of that era’s architecture as you take in the crisp, comforting wintry air. In your prepossession, you fail to notice a spot of ice ahead on the walkway and, whoops, you slip. In doing so, your tibia breaks and, very unfortunately, protrudes through your skin. Seeing your plight, a passerby summons a constable and the two carry you to the nearest hospital, where, for one reason or another, the surgeon decides that your broken leg must be amputated mid-thigh.

Suddenly and shockingly, you find yourself on a blood-encrusted table in a stifling operating theater. At least one hundred spectators, some of whom have little or nothing to do with the study of medicine, and none of whom you know, are transfixed by the surgical sport of your leg being lopped off. Luckily, your surgeon was London’s most renowned at the time, Robert Liston. Unluckily, Joseph Lister was yet to arrive on scene and, though you survived the amputation, you died an all too common death—that of hospitalism. Or, as simply stated in today’s terms, infection.

Sparing no detail, Lindsey Fitzharris’ The Butchering Art: Joseph Lister’s Quest to Transform the Grisly World of Victorian Medicine is itself a grisly, though wonderfully written, account of the horrors of Victorian medicine, specifically those of surgery and post-operative infection. The bulk of Fitzharris’ history regards, as its title suggests, one Joseph Lister, who, most graciously, spared us from the brutal, Dickensian-like world she describes. In her words, Victorian medicine was “the age of agony.”

Victorian era British hospitals lacked cleanliness, to say the least. In one account, a patient was found convalescing in damp sheets covered with mushrooms and maggots. Putrid odors permeated the facilities, as well as the doctors and the medical students who worked within. Operating tables were not cleaned from one patient to another, instruments were not sterilized between patients, and employees’ hands, let alone the wounds of the afflicted, were scarcely washed. Surgeons and their assistants performed grimy operations, haphazardly throwing limbs and flesh into buckets or onto sawdust-covered floors. Literal body snatchers disturbed the dead by digging them up and delivering them to hospital dissection rooms, where men carved them up in the interest of medicine. This is but a sampling of pre-antiseptic conditions.

At the time, surgeons were paid less than those whose job it was to rid the hospital beds of lice and, often, those who chose to specialize in the field were stigmatized. Surgery was considered manual labor rather than medical practice. In part, no doubt due to the fact that, in its infancy, surgery was an absolute last resort primarily comprised of the quick lopping off of limbs. Not only was surgery dangerous for the patient, but for doctors and their assistants. Take, for example, a man who once assisted the aforementioned Robert Liston. Quick with his saw, Liston accidentally sliced three fingers off of the assistant when removing the patient’s limb. Both patient and assistant died of post-operative infection.

Enter Joseph Lister. Born into a Quaker family, it’s somewhat ironic that Lister chose to become a physician, as the Quakers were known for their disbelief in medicine. Fortunately, Lister’s family was very supportive of his medical endeavors. Lister and his father had a common bond–the microscope. Lister’s father made a number of improvements to the device and Lister was one of few students in medical school acquainted with it. In fact, his professors and  contemporaries alike thought the microscope either frivolous or superfluous to medical pursuits. Yet, and thankfully for us, Lister persisted.

While Lister’s predecessors and peers were more interested in treating the symptoms of infection, Lister was more curious about discovering its causes. He spent countless hours peering through the lens of his microscope, viewing, sketching, and painting human tissues, fibers, and the like. He acquired specimens from others within his field, as well as harvested from his own body. He was so devoted to his cause, that he and his wife, Agnes, who was the daughter of his mentor, spent their honeymoon collecting frogs for Lister to dissect. Throughout their marriage, she was often in his study or lab with him, taking notes and essentially acting as his assistant.

Eventually, Lister gained an understanding of infection, of how hospital environments impacted the outcome of procedures and the well-being of both patients and staff. Although his theories were initially rejected by the Victorian medical community, over time Lister was able to prove them and he received a number of awards and recognitions throughout his career. Conditions improved, not only in British hospitals, but in hospitals everywhere, as cleanliness became increasingly practiced.

Fitzharris’ narrative of the transformation of Victorian medicine is altogether fascinating, if gruesome and not for the faint of heart nor for the weak stomached. Although she writes in a manner that speaks well to those outside of the world of medicine, I wrote this review after reading this title twice. Trust, it’s a lot to take in and a lot to process. 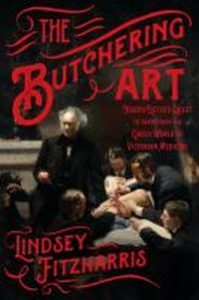