What are you wearing? Plaid (tartan)? Paisley? How about stripes or polka dots? Perhaps a fleur-de-lis pin graces your lapel? Regardless, these motifs and patterns and more have fascinating associations and histories as told by Jude Stewart in his book Patternalia: An Unconventional History of Polka Dots, Stripes, Plaid, Camouflage, and Other Graphic Patterns.

In addition to content, the book itself is somewhat unconventional by design, both physically and stylistically. Titles found in the adult nonfiction collection tend to be large and heavy, whereas Patternalia is small and lightweight. Stylistically, Patternalia defies the typical beginning, middle, end formula for telling such stories. The text is dotted with cross-references so readers may develop an alternate storyline. It’s also embellished with quotes and bold graphics throughout.

Stewart starts us on our journey with a crash course in patterns and pattern lingo as well as an explanation of how our brains perceive “symmetry, orderliness, and simplicity”–basically, a pattern–and how we define and process this into what we see. He discusses ‘pareidolia,’ “the process of seeing imaginary forms, especially faces, in random stimuli,” such as outlets, and ‘apophenia,’ which is the perception of pattern where there is none, which may be either visual or conceptual. A conceptual example of apophenia is that of “gambler’s fallacy.”

Before we delve into particular patterns proper, we learn a bit about the history of patterns and the textile industry. The gist is that as production became increasingly industrialized, patterned textiles became cheaper, easily portable, and shareable across cultures. As patterns and patterned textiles crossed national borders, their meanings could change or evolve, such as with popular “African print” textiles. (Why? Read the book!)

As pattern and textile technology continued to advance, patterns were able to be printed directly onto textiles, which led to disposable fashions. Think Paper Caper dresses and such. Imagine wearing your clothes a few times and throwing them into the trash can rather than the laundry basket. These sorts of disposable fashions didn’t fall out of fashion until the rise of environmental consciousness. (Thank goodness for environmental consciousness!)

But what about the patterns? I dare say we take them for granted, no doubt due to their ubiquitousness–they’re everywhere! Patterns hold histories and connotations, whether we realize it or not. Take polka dots, for example. According to Stewart, dots and spots–polka dots–gained popularity “from an extended craze for polka music” that overtook Europe in the mid-1800s. But in Medieval Europe, polka dots were reminiscent of disease and death. Specifically, syphilis, bubonic plague, measles, and more. Yet we enjoy polka dot patterns on an array of items, from notebooks to scrapbooking paper, t-shirts to bathing suits, bedding to curtains, and so on, without considering their history. Not to mention the parallel Stewart draws between dot art and activism–bravo!

Overall, Stewart’s Patternalia is as charming as it is interesting. My only criticism is that it ends rather abruptly, not unlike this review. As for the other patterns–plaid, paisley, stripes, fleur-de-lis, checkered, houndstooth, etc.–you’ll have to check it out for yourself. I leave you with this anonymous quote: “Even a small dot can stop a big sentence, but a few more dots can give a continuity…” 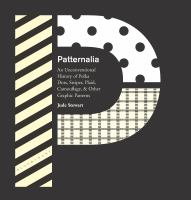