We’re giving away Mail Art Take-Home Kits! Starting Thursday, July 1, 2021, you may pick up your kit from one of three places inside Joplin Public Library:

Although the kits differ slightly, each contains everything you need to create one piece of mail art to mail in for the Post Mail Art Projekt: Show Me Mail Art exhibit, including a self-addressed stamped postcard.

Post Mail Art Projekt 2021: Show Me Mail Art (PMAP2021) is a collaboration between us, Connect2Culture, and Joplin Public Library. PMAP2021 is endorsed by Missouri 2021, an initiative of The State Historical Society of Missouri. For more information, contact Jill at 417-623-7953 x1041.

This book review is a celebration of sorts of both the Missouri Bicentennial (2021) and National Preservation Month, also known as Historic Preservation Month (May). In Historic Missouri Roadsides, author, historian, and preservationist Bill Hart takes us on a two-lane highway trip through several of Missouri’s small-town destinations, introducing us to, or reacquainting us with, what they have to offer.

Before taking us on the road, Hart breaks down the “how to” of using his book, pointing out that how long each trip takes to complete is, in fact, up to the traveler. Each stop along two-lane Missouri includes basic historical information about the place, suggestions for where to eat and stay, as well as for where to visit and what to do. Hart reminds us that these trips are meant to be leisurely rather than a race from point A to point B: “Chill. You’re not traveling on two lanes to win any races […].”

These adventures are arranged neatly into six road trips: Missouri Highway 79 / The River Road; El Camino Real; Route 100 / Gottfried Duden & the Lewis and Clark Trail; Osage Hills and Prairies; Mostly Route 24; and The Platte Purchase. Each tour begins with a summary about the trip and information about where, exactly, to start, and each town visited within a given tour clearly directs us to the next town. Although it is possible to reach some of these points using freeways, I recommend following Hart’s directions, as exploring what’s along our byways (rather than the sameness of our freeways) is the beauty of venturing out in the first place.

I feel a special kinship with this book as I start to travel about again. It’s a fantastic resource for those of us who wish to start by seeing what the places close to home have to show us. One of my favorite things about this title is that the largest city we’re guided through is St. Joseph, with a current population of about 73,400, give or take, whereas the smallest cities are only in the double digits.

Don’t get me wrong – I love visiting Kansas City, St. Louis, and other larger Missouri cities – but Missouri has much outside of those cities to show us. For example, a 1910 Beaux Arts-style post office in Nevada; the historic Hall of Waters in Excelsior Springs; a theatre in Blackwater, where productions written and directed by a local playwright are featured and locals serve free punch and cake during intermission; and landmark bluffs and other natural sites in tiny towns like Arrow Rock. We may even opt for additional “side trips” that take us into more remote areas of the State, such as Lithium, which, once upon a time, was a Victorian resort town.

Hart touches on the prehistory of Missouri, mentioning which Indian tribes traversed which areas before European American settlement, as well as tells the story of town names and sites that take their name from Native American and early European American history. He also makes mention of conservation areas, national register listings and districts, state parks and historic sites, persons of note, and more.

Not to mention the wonderful photographs, which enhance the stories of these lesser-known Missouri places. Check out the magnificent 1884 Second Empire Federal Courthouse on page 20, the picturesque view from the Fourche à Duclos Roadside Park on page 43, or the Old Dutch Hotel and Tavern’s neon sign in Washington on page 86.

It’s worth mentioning that two editions of this book are published and that the second edition is expanded to include “Destinations,” which are meant as stand-alone places to visit rather than a guided road trip. These destinations include St. Joseph, Glasgow, The Boonslick area, Fulton, Sedalia, and the Arcadia Valley.

As noted in his foreword, this book is “a travel book, a history book, a photography book, and more.” Indeed, it is all that and more. It is an opposition to what Hart describes as “Generica,” or the commodification of place and product. The fast-food chains and big-box stores found along our freeways and in our commercial districts, for example, all of which look the same regardless of locale. Hart encourages us to turn away from Generica for the uniqueness of “what lies right beneath [our] noses here in the Show-Me State.” Not only does he encourage us in this direction, but he literally tells us how to get there. 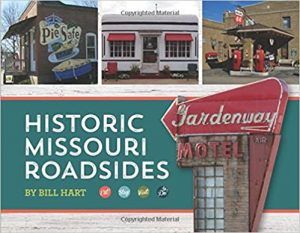