One of my favorite things about traveling is experiencing the unique food and drink of the places I visit. To be honest, I like that as much, in some cases more, than site-seeing. In Missouri, you don’t have to go far before coming across breweries, distilleries, Kansas City barbeque, St. Louis Italian, Sedalia’s State Fair food, wineries, and much, much more. Although it’s less of a “where to eat travelogue” and more of a history proper, authors Suzanne Corbett and Deborah Reinhardt take us on quite the journey in A Culinary History of Missouri: Foodways & Iconic Dishes of the Show-Me-State.

We begin in colonial Missouri with our first European settlers—the French. According to the authors, “Unlike other American Colonial groups, Missouri’s French defined themselves through their food ways.” They made mud ovens in which to bake bread from wheat they grew and milled. The enslaved Africans who arrived with them introduced okra and gumbos into their food culture.

Food itself aside, it was important to Missouri’s French colonists to maintain their food customs, including table settings and cookware. The table was always set! And cookware was largely the same in poor and wealthy households, featuring kettles, pots (iron, tin, copper, wood), baking pans, pudding molds, pepper mills, utensils, etc.

To grow food, they created common fields, which were not unlike today’s community gardens, though a bit more involved. In these fields, people cultivated a variety of row crops. Some of the fields, such as the one in Ste. Genevieve, are still visible today.

Food was very much tied to holidays and tradition. For example, the King’s Cake, “a fanciful cake enriched with butter, incorporating aromatic spices, ground nuts, and fruit glaze” was baked to celebrate Twelfth Night. As it goes, a bean was placed in the batter before the cake was baked. During the Twelfth Night Ball, the King’s Cake was served to all the gentlemen and whoever found the bean in their cake was proclaimed king and got to choose a queen. This celebration is carried on today at the Gateway Arch Museum in St. Louis. Each year, they welcome the public to their annual Twelfth Night Ball.

Another food-related holiday event takes place annually in Ste. Genevieve. La Guignolee, “Missouri’s original New Year’s Eve,” is a celebration in the streets, taverns, and cafes of the Historic District that features dancing, singing, food, and drink. Like the Twelfth Night Ball in St. Louis, Ste. Genevieve’s La Guignolee is open to the public—ring in the New Year like it’s 1769!

The authors take us linear from the 1700s into 1800s Missouri, when the English and Scotch-Irish, and their enslaved African Americans, “arrived from Kentucky, Tennessee, Virginia and Illinois.” Their specialty? Curing and smoking hams. In fact, they were so good at curing and smoking hams that “Missouri became and remains one of the few states included in the American Ham Belt.” Yes, that’s a thing—the American Ham Belt. Portable soup, a sort of predecessor to bouillon, is also of this era. It was a bone broth boiled down to a gelatinous paste then dried and cut and could be reconstituted with water.

The authors bring to light how food and the introduction of new food to an area can change, or re-establish, food production. For example, when Turkey Red wheat was introduced to Missouri by Russian immigrants in the 1870s, it “revitalized milling operations” when two men bought the old community mill, rebuilt it, and produced “Queen of the Pantry Flour,” which became very popular. It’s interesting to think that if Turkey Red wheat hadn’t been introduced to that area, the mill would have, like so many others, fallen into disrepair and likely eventually been torn down.

I didn’t realize Missouri is home to big-name food brands, such as Aunt Jemima Pancake Mix (which began as Pearl Milling Company Pancake Mix, the namesake which it returned to in 2021 “in an effort to make positive progress for racial equality”) and Saltines. Also, the Golden Delicious apple was discovered and developed in Louisiana, Missouri. Other food discoveries originated in Missouri, too, such as burnt ends in Kansas City, and the first bread slicing machine in St. Joseph.

The railroad had a tremendous impact on food, helping to overcome “regional limitations” by significantly reducing the time it takes to move food, thereby “making more food accessible and affordable.” Moreover, as passenger service increased, so did the demand to dine while in transit. Hence, the dining car (which was preceded by buffet/refreshments cars, not unlike those used by airlines today, though they failed to appease travelers’ appetites).

The Rockcliffe and Garth Woodside mansions, both of which are on the National Register of Historic Places in Hannibal, Missouri, offer a sort of breakfast reenactment in honor of Mark Twain: “Elegant breakfast served in a style that Twain would have approved.” Visitors may also dine at the Mark Twain Dinette, a circa 1940s diner near his boyhood home.

Interestingly, we learn about much more than the history of food in Missouri. We learn, too, about the history of our culture and our people. Take, for example, Crown Candy in north St. Louis. Opened in 1913 by best friends who emigrated from Greece, Crown Candy Kitchen is the city’s oldest operating soda fountain. (And, though it’s not mentioned in the book, I hear they have good BLTs!) Jazz, politics, and sports are among the cultural aspects discussed by the authors.

A culinary history of Missouri would not be complete without touching on Missouri’s breweries and wineries, of which Missouri has (and has had) plenty. The authors discuss German settlement of central Missouri and the “grape lots” that came to be in that area, which lead to the establishment of Missouri wineries. Breweries in St. Louis, as well as other areas, are highlighted, as well as the impact of prohibition on alcohol-related establishments throughout the state.

Not only does this book serve as a culinary history of Missouri, but a cookbook, too. At the end of each chapter, you’ll find the recipes referenced. Here are some that caught my eye: 1830 Chicken Pie, Cowboy Beef and Beans, Saltine Cracker Pie, Fred Harvey Railroad Cole Slaw, and Pioneer Chili.

As always, happy reading and, in this case, happy eating. 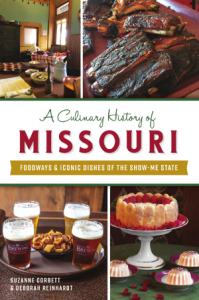