Every community has its long-standing events and Joplin is no different. This month, I’d like to tell you about Joplin’s longest-running community event: the Emancipation Day Celebration. Organized annually by our local Black community since the 1800s, this multifaceted event continues to celebrate the end of slavery. Typically, August 4th is set aside for Emancipation Day festivities in Joplin, but these celebrations haven’t always been held only in August.

An early account in the library’s local history files of an Emancipation Day celebration is in the September 21, 1877 edition of the Joplin News Herald newspaper. It states: “The [Black] people of Joplin and vicinity will have a big time here next Wednesday, it being their Independence Day. Extensive preparations are being made for that event, and every [Black] man and woman are doing all in their power to make it a grand success. That they will succeed there can be no doubt whatever. A number of prominent speakers, both white and [Black], will be present.”

At the same time, we have accounts of Emancipation Day celebrations in August, on or around August 4th, as documented in an August 5, 1877 Joplin Daily Herald article. Interestingly, a correction was printed that same year that “The announcement that all the [Black] people of Joplin will celebrate on the fourth of August is untrue. There are some of us who believe that we should celebrate the emancipation of the slaves in our own land, and let those of other nations do the same. The 23rd day of September is a good enough day for us,” signed, P.G. Yeager.

In 1912, Joplin hosted both August and September Emancipation Day celebrations. On August 6th of that year, the Joplin Morning Tribune printed an article describing events at Lakeside Park as “a grand success,” with at least 3,000 attendees. Just a handful of weeks later, on September 19th, the Joplin News Herald tells of a “Big Event” for Emancipation Day being observed at Electric Park, featuring Charles Henry Phillips, a Black orator from St. Louis who was known as “one of the finest speakers in the Middle West.”

A Missouri Historical Review article claims that, since 1920, Black people in Missouri have celebrated on August 4th, though why, exactly, is not known. But, they suggest, “There is a possibility that the date celebrated in Missouri has some reference to the abolition of slavery in the West Indies […] although the connection, if any, has not been established.” If the August 5, 1877 Joplin Daily Herald article is any indication, then the August 4th celebrations are most likely held to commemorate the emancipation of slaves in the West Indies, as described: “The celebration by the [Black] people of the emancipation of the slaves in the West Indies in the year A.D. 1834 by the British parliament at the instance of and by the eloquent pleading of Hugh [?] Wilberforce, who for years stood alone in the advocacy of the claims of humanity upon the civilized world, took place at Castle Rock park upon the banks of Turkey Creek, near this city [Joplin] yesterday.” This is to say that a West Indies Emancipation Day Celebration took place near Joplin at Castle Rock park on August 4, 1877.

In an August 4, 1984 Joplin Globe article, another reason for the August 4th celebration surfaces: “Area [Black people] celebrate Abraham Lincoln’s Sept. 22, 1862, signing of the Emancipation Proclamation on Aug. 4 because it was on that date in 1863 that the news of slaves being freed reached this area, says Thelma Meeks, a retired schoolteacher.” After all, news traveled slowly in the 1860s!

Regardless of whether it was celebrated in August or September, and whether the reasoning behind choosing when was tied to Lincoln’s proclamation, the abolition of slavery in the West Indies, or because of how slowly news traveled, we know, for certain, that Joplin’s local Black community has held Emancipation Day celebrations for 146+ years with community events featuring music, dance, parades, orators, picnics and barbeques, games, exhibits, markets, and more, making it Joplin’s longest-running community event.

Depicted below is a photograph from Joplin’s 1952 Emancipation Day Celebration at Ewert Park. For more information about Joplin’s Park Days, visit Joplin Emancipation’s website at www.joplinemancipation.com.

We are glad to partner with Joplin’s own Langston Hughes Cultural Society to present Still Here: A Collection of Artifacts from the Family of Langston Hughes in Joplin Public Library’s Community Room on Saturday, March 5, 2022 at 10:30am.

This is a free, public event. Registration is not necessary. Please note that seating is limited and available on a first come, first served basis. For more information, contact Post Art Library Director Jill Sullivan at 417.623.7953 x1041. 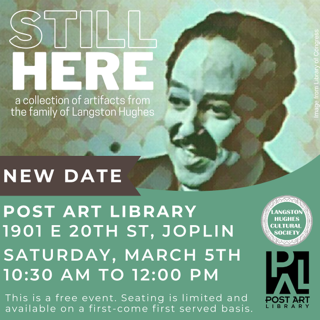