March is Women’s History Month. To celebrate, I encourage you to read a book written by – or, better yet, by and about – a woman. I started this year’s celebration by doing just that, with Margot Mifflin’s The Blue Tattoo: The Life of Olive Oatman. Admittedly, this wasn’t my first reading of this title, but my third.

Olive Oatman was born to parents who decided to settle in the American southwest as it was becoming the American southwest. Although much of the Mormonism that she was brought up with was left out of the many narratives about her life, Mifflin picks up Olive’s story at the point when it was, in fact, that very Mormonism that influenced the family’s move. Following the Brewsterite sect that broke away from Brigham Young, the Oatmans set west with others to what they thought would be a sanctuary and some sort of nation in and of itself, a nation within an expanding nation (both of which were destructive, to say the least, in their makings).

On their trek to California from Illinois, Olive’s father, Royce, broke the family away from the original Brewsterite caravan in what is now southwestern Arizona, quickly leading to the family’s demise. After an intense night “marooned on a tiny island surrounded by quicksand in the Gila River in Mexico,” the family encountered members of the Yavapai Indian tribe, who, after seemingly harmless initial contact, killed Royce, his wife Mary Ann, and four of their seven children. Lorenzo, who was all but dead after the attack, was thrown off a cliff and left to (presumably) die, while two of the daughters – Olive, 14, and a younger sister, Mary Ann – were taken by the Yavapai.

Olive and her younger sister spent about a year with the Yavapai Indians. According to Mifflin (and others), they were treated as captives, which is to say that they were treated poorly. The Mohave tribe, upon seeing the girls’ mistreatment, requested that they were traded to them. After negotiations, the girls were traded to the Mohaves, who accepted, raised, and treated them as their own. Olive spent about four years with the Mohaves; Mary Ann fewer only because she perished during a famine that they experienced.

Olive and Mary Ann were led to the beautifully described Mohave Valley by Topeka, who became their Mohave sister. Espaniole, a festival chief, and his wife, Aespaneo, became the girls’ Mohave parents. The bond that the girls, especially Olive, had with their Mohave family was strong. When Mary Ann died, both Olive and Aespaneo mourned in the traditional Mohave manner. The Mohaves gave Olive a nickname, which “confirms her acceptance within the culture; if she had been marginalized within the tribe, she would never had warranted one.” Some suspect, though never substantiated, that Olive married and had children while with the tribe.

It’s unknown whether Olive actually wanted to rejoin white society after her time with the Mohaves. It is known, however, that she had no choice but to do so once her whereabouts were discovered. The Mohave Indians were forced to return her to the whites “in exchange for horses, blankets, and beads.” Olive was upset during her so-called restoration to white society, which, as Mifflin points out, is an indication that she did not wish to return. Also, Olive never spoke ill of the Mohaves and, when the opportunity arose later in life, she went to greet and see a member of the tribe speak at an event.

I would be remiss if I did not mention Olive’s tattoo – the blue tattoo – not only because that is the book’s title, but because I am a visibly tattooed woman, though in another, vastly different, context. Nevertheless, I’m intrigued by Olive’s status as a tattooed woman, as well as interested in the history of women and tattoos, which, admittedly, is what prompted my initial reading of this book (and others by the same author).

Placed on her chin, Olive’s tattoo was a very public, permanent mark – in the 1850s – of her time with the Mohaves. Unlike some other tribes, the Mohaves did not tattoo their captives. Rather they tattooed only those who became a part of their tribe. Mifflin writes that Olive’s willingness to be tattooed indicates her willingness to become Mohave. Olive is the first known tattooed white woman in the United States, as well as the first known to profit from her tattoos. (In addition to her chin tattoo, she had vertical lines on her arms, though those were never shown publicly.) Olive’s narrative became so popular that tattooed ladies – women with real tattoos – started showing their skin in circuses and sideshows, stealing Olive’s story, distorting it and claiming it as their own, saying that they were captured and forcibly tattooed by Indians.

Olive was not like any other woman of her time. Upon her return to white culture, a man by name of Stratton wrote a (highly profitable) sensationalized account of her capture and she became a touring lecturer during a time in which it was highly unfavorable for women to work or have agency outside of the home. Eventually, Olive married a man named John B. Fairchild. In a letter to her aunt that the author includes and discusses in the postscript, it seems Olive’s marriage was a happy one. Eventually, Olive and her husband settled in Texas, where she died in 1903.

In her epilogue, Mifflin discusses Olive’s posthumous appearances. That is, her ongoing legacy in literature and television, connecting her to numerous novels and shows inspired by her story, as well as to those who tried to write themselves into her story. The author refers to this legacy as “Oatman’s Literary Half-Life” and notes, and seems disappointed, that not once in these fictional accounts is Olive reunited with her Mohave family. Indeed, it is disappointing that, even in fiction, Olive never makes her way back to the Mohaves.

I might mention that you will not find this book on the library’s shelves, but as an e-book via the library’s Ebsco eBook Collection database, which may be accessed with your library card on Joplin Public Library’s website or through their card catalog. 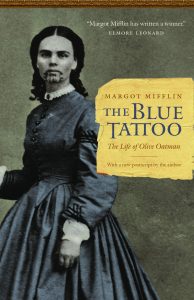