Bridget Quinn’s Broad Strokes: 15 Women Who Made Art and Made History (In that Order) is as much an artful book as it is an art history book. Indeed, I was initially drawn to the title because of its vibrant colors—broad strokes of pinks and reds—with large, bold typeface. The book’s cover and jacket are appropriately textured to the look and feel of canvas. But I shouldn’t judge a book by its cover, right? In this case, it did not disappoint, as it’s even better between the covers. A turn through smooth, thick matte-finished pages reveals a pleasing layout of double-columned text mingling with images of artworks. Plus, each chapter begins with an illuminating illustration by Lisa Congdon.

Yet the essence of this title is neither its cover nor its aesthetic appeal. The crux of the matter is that, too often, treatises on art history overlook the contributions of women. By contrast, Quinn offers a diverse sampling of women artists, spotlighting the significance of their artworks while carefully curating the stories of their lives.

Quinn introduces us to her 1987 self, a young, self-described “clueless woman-child with dyed black hair and a newly pierced nose” who “swooned with the romance” of artistic expression as it relates to humanity. As a first-year art history major, she soon realized that women-as-artists are scarcely mentioned in the standard text, H.W. Janson’s History of Art. She noted that in over 800 pages, women artists are referenced only sixteen times. Thus, Quinn made a list and set out to learn more about women artists.

While in graduate school in New York, she was assigned research regarding Adélaïde Labille-Guiard, a masterful French portraitist. After a long, presumably discouraging day “wrestling with eighteenth-century French” at the library, Quinn became despondent, dining on chocolate chip cookies and beer as she wondered why she ever decided to study art history. Finally, her aha moment: “I want to be an artist, not study them. I came to New York to be a writer.” And a good one at that.

Although she presents herself and her subject seriously, Quinn’s prose is informal and playful at times. She doesn’t shy away from insightful mini-digressions or the occasional bad word, for which she charmingly apologizes for in the dedication. Quinn warmly and skillfully weaves personal experience with the larger narrative and draws a parallel between visual art and literature. Through her writing, she paints portraits of women into the landscape of art history.

Arranged in fifteen chapters that chronicle the lives and art of as many women, each section could be read as a stand-alone biography. I recommend, however, that first-time readers read the book in its entirety, from beginning to end. Doing so helps contextualize the adversities and obstacles that these women overcame (or didn’t), as well as those that contemporary women artists continue to face.

Don’t get me wrong—it’s not all about adversities and overcoming obstacles. It’s also about creation, passion, unconventional self-portraits, diversity, autobiographical abstraction, love, tragedy, sugar sculptures, expertise, mastery, Art Before Dishes, and so much more. But don’t take my word for it; check it out for yourself. You’ll find this title in Joplin Public Library’s new nonfiction section.

In what might be considered a flash afterward to her book, Quinn draws attention to the fact that she started by discovering sixteen women artists in the third edition of Janson’s History of Art, yet she presents only fifteen in this title. Answering her own question, “Why one short?”, Quinn writes, “I’ve left room for myself. For you. For anyone who wants it.” She began and ended Broad Strokes with three simple words: “Let’s get started.” Shall we? 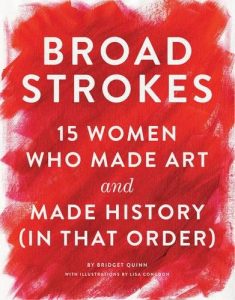