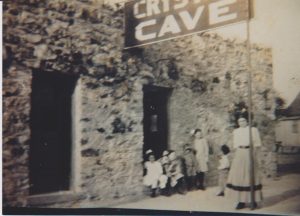 Discovered in 1893, Joplin’s Crystal Cave was a popular destination for some time. Located 80 feet below the surface at 4th Street and Gray Avenue, it measures 225 feet in length and its cavern is completely bedazzled with giant crystals. Formally opened to the public in 1908, one could take in the wonder by purchasing a ticket and following a tour guide down a long flight of wooden stairs. Or perhaps one was lucky enough to be invited to a private party or attend an occasional dance. This “subterranean dance hall” fell out of step when local mining ceased, as it became full of groundwater. All access to the cave was sealed and so it remains. 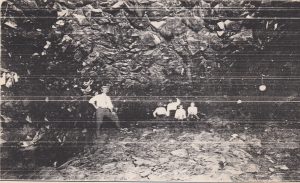 Visit the Post Memorial Art Reference Library for more information on Crystal Cave, as well as Joplin’s other historical wonders.

On his website (http://www.codywhite.com/), Cody White describes himself as having “a job and a home and some loved ones.” Indeed he has. One might further describe Cody as having an inclination toward words and images. Moreover, one might say he’s talented at that. Indeed he is. …Years ago, Cody and I met via mutual college friends. I’ve since had the opportunity for close-ups of his creative endeavors, particularly his poetry and photography. Cody photographs sets that he builds from the ground-up:

In both Northpark Diary and Familiar Spirits, Cody cuts, outlines and sculpts white paper into particular dimensions (some of which are scaled life-sized). In A Day in the Woods, he builds sets with dimensional objects which he’s painted black. He then repaints the sets with light as he takes photographs. I recently visited Cody in his studio, where we discussed his photographic process.

(Jill’s comments/questions are in bold,
whereas Cody’s are not.)

One thing that’s important to me is to keep the content itself realistic. The style can indulge in fantasy and I think it does.
I do, too. And I think that your content is realistic.
Yeah, I really like that set-up, with the content being realistic and the style being the more indulgent.

May I start asking you questions?
Yeah.

How long has it been since you took a photograph and thought that it’s something you would like to put time and effort into?
I think that my first desire to do photography started with this project.
With Northpark Diary?
There were some pictures that I made before Northpark Diary when I first had the process in mind. I made them with just a little click-click camera that I had to go and get the film developed.
So when you first started you were doing stuff on film rather than digital?
Yeah. Digital versus film has never really been a particular concern for me. I’m not aesthetically disinclined toward digital. Somewhere along the line I got the idea to make these and that was the first time that I ever thought of photography as art for myself, about four or five years ago.

You have your photography grouped into three distinct galleries: Northpark Diary, Familiar Spirits and A Day in the Woods. Although each gallery features a unique theme, all photographs showcased are built from the ground-up. Why are you drawn to creating scenes rather than photographing those which already exist?
I want to have a high degree of control and of what the viewer sees, but not necessarily control the viewer’s reaction to or relationship with the photograph. The pictures that I produce look like the pictures I envision. Building them gives me the ability to create them as I see them. It would be harder to say why I look around my apartment, for example, and envision a scene that’s black and white and has this odd sense of depth to it. Something about the black and white does resonate with my imagination. Thinking about the black and white [scenes] was really the thing that launched the whole process for me. There’s a lot of things that I’ve thought about it since then, a lot of reasons why I think it’s powerful, but I didn’t think of the reasons and come up with the project.
Right, you just started doing it and the reasons happened organically.
Yeah, exactly. It’s important to me that I don’t control the viewer’s experience too much. What I would actually like to do is corral the experience to a degree, but leave them a certain jumping off point.

Whenever I look at Northpark Diary and Familiar Spirits, I sometimes feel that all of that white space is impersonal. Yet other times it feels inviting, as it plays with depth and encourages the viewer to sort of fill in the blanks. Initially, I was put-off by A Day in the Woods. Perhaps because those photographs seem more typical, as you’re photographing dimensional objects painted black rather than creating something dimensional out of something flat.
What I really want out of A Day in the Woods is not so much for the viewer to see that they’re objects painted black, but that I want them to be a uniform dark color so that I could repaint them with light. What I envision is something where these different forms are swallowed in the blackness and the blackness blends together. But from the color that I project with the lights, the viewer can see the edges and slivers of traces of the forms and these bits will seem to be glowing unto themselves. But honestly these images aren’t where I want them to be yet. There are some technical problems I need to solve on the photography end before these will look like how I see them. But I couldn’t resist putting them up, even though I shouldn’t.
When I think of a day in the woods, I think oh, a day in the woods, la, la, la, la, la… and your Day in the Woods is very dark, more like a scary night in the woods.
That sort of disorientation is a starting point for me. I want there to be the play between the different tones and the different ways of seeing the same objects. Because sometimes you have an ambiguous relationship to the things in the world.

That’s what I like about what you do. You focus on what makes up the big picture–the ambiguities, if you will–rather than THE big picture. It’s appealing: no particular beginning, middle or end. It’s not figured out just by looking at it. It’s something that exists which is a part of something else that existed and it’s fluid.
I think that I feel pretty strongly that if you try to give THE big picture it’s always going to fail and you’re always going to be lying. Reality is always more than can be encompassed. All you can really do is capture some of the complexity, some of the ambiguity and the mixed experience that you personally have with it. To be honest, I don’t have a feeling.
You have multiple feelings.
Yeah, shades of feeling that continually blend and wash amongst one another. It’s important to me to capture that flux.