Brett Dorrance’s GRIND is comprised of a typographic sculpture and posters. Dorrance’s background knowledge of graphic design and 3D design is displayed in a pragmatic, modern, and uplifting way. He has a large interest in motivational messages and helping others from the bottom to the top. His desire is for the viewer to walk away with a sense of encouragement.

“We all go through a daily GRIND no matter what the circumstances are. I want that daily GRIND to be applied in a way that brings success and hope, not destruction or failure,” said Dorrance.

GRIND is on exhibit in The Bramlage and Willcoxon Foundation Gallery inside Joplin Public Library, 1901 East 20th Street, Joplin, MO now through January 5, 2019. An artist’s reception will be held in the gallery on Thursday, October 24, 2019 from 6-7:30pm.

In his application to show artwork in the library, Maxwell Heckman described himself as “a young, somewhat inexperienced photographer.” He went on to say his philosophy is artists must enjoy their work, be proud of their failures, and, above all, keep going.

In his practice, he wakes at 5am and walks about with his camera, taking photos, whether it’s 5 degrees or 106, rain or shine, good or poor lighting, etc. He keeps going, shooting as many frames as he can, enjoying the process.

Rather than viewing his artwork as good or bad – “peeks or valleys” – he sees it as a vehicle for improvement, as “always having the opportunity to get better.” That, he says, is why he’s an artist.

When working with Maxwell to determine which of his work to show in the library, I became intrigued with juxtaposing his gas mask series and landscapes. The stark contrast between the black and white gas mask photographs and the saturated color landscapes demonstrates Maxwell’s aptitude for exploring his medium while eliciting an indescribable connection between the two series.

Indeed, he might be young and somewhat inexperienced, but his work is experimental and promising.

Heckman’s photography is on display in the Genealogy, Local History, and Post Reading Room wing inside Joplin Public Library now through November 30th.

Route 66 – Highway to the Stars, an educational exhibit created by local history detectives and authors William and Doris Martin, is showing now through July 31 in the Genealogy, Local History, and Post Reading Room wing of our library. The Martins discovered a connection between William’s mother’s family and astronomer Edwin Hubble’s mother’s family, who were living in Marshfield, Missouri many years ago.

When William’s 91-year-old aunt told them, “This story needs to be told,” they wrote and self-published a book entitled Dreams and Adventures: The Edwin Hubble Story (2015). It’s an inspiring, never-before-told story about the amazing astronomer for whom the Hubble Space Telescope is named.

After publication of their book, the Martins continued to research astronomy and space exploration. William began creating original storyboards about Edwin Hubble and many other astronomers, astronauts, observatories, and planetariums. Many of these people and places, as it turns out, have connections to Route 66, such as astronomer Harlow Shapley and astronaut Janet Kavandi.

Discover the dreams and adventures of Edwin Hubble, learn about Harlow Shapley – the man who determined our solar system’s place in the Milky Way – visit some planetariums and observatories, soar with astronauts, and reach for the stars as you travel along Route 66 – Highway to the Stars!

“Sculpture Works in Wood,” a solo exhibition by local artist M. Justin Hale, is on display in our Bramlage and Willcoxon Foundation Gallery, our display cases, and in the Post Reading Room inside Joplin Public Library now through September 30, 2019.

Hale sees anatomical references whenever he carves. Most of his professional life has been spent working in prosthetics. Leaving the prosthetics field in 1999, he now devotes his life to his artwork.

His work is inspired by the bent and twisting forms found in remnants of trees from a long and well lived life. Finding and releasing the stored energy of the wood into a new life as sculpture is a great experience.

Library exhibitions and displays are curated by Post Art Library. Their mission is to enrich the community of Joplin by perpetuating Dr. Winfred L. and Elizabeth C. Post’s love of art, architecture, history, and history preservation through public access to arts-related library resources and services, educational programming, events, and exhibits. Visit www.postartlibrary.org for more information. 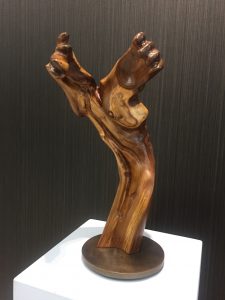 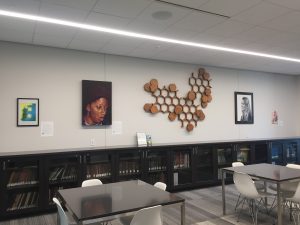 Gone are the days of laborious photographic processes. Most of us use cellphones rather than cameras to take photos. No doubt – and more often than not – the photos we take remain stored on electronic devices or in virtual clouds instead of tangibly tucked away in albums gracing our shelves or frames decorating our walls. With modern technology, it’s understandably easy to forget about historic photographic processes, such as those used to make ambrotypes, CdVs, and tintypes. Fortunately, we still benefit from the results of these processes by way of antique photographs, such as those in Allen Shirley’s collection, a selection of which is showing now through March 2019 at Joplin Public Library.

Although the display is largely comprised of tintypes, a photograph made by a direct positive on a thin sheet of metal coated with a dark enamel, it includes a small selection of ambrotypes, a positive photograph on glass, and carte de visite photos, a type of small photograph patented in Paris. The photographs depict George and Martha Washington; Abraham and Mary Todd Lincoln; Edgar Allen Poe; Harriet Beecher Stowe; Frederick Douglass; Albert Einstein; Sitting Bull; Calamity Jane; Annie Oakley; the aftermath of Gettysburg and other Civil War era photographs; and more. 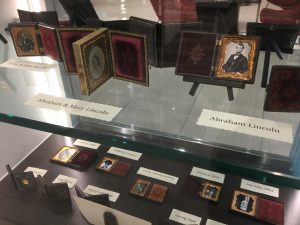 Library exhibitions and displays are curated by Post Art Library. Their mission is to enrich the community of Joplin by perpetuating Dr. Winfred L. and Elizabeth C. Post’s love of art, architecture, history, and history preservation through public access to arts-related library resources and services, educational programming, events, and exhibits. Visit www.postartlibrary.org for more information.

Organized by the Smithsonian Institution Traveling Exhibition Service (SITES) in collaboration with the National Museum of African American History and Culture, “A Place for All People” highlights key artifacts that tell the rich and diverse story of the African American experience. From the child-size shackles of a slave and the clothing worn by Carlotta Walls on her first day at Little Rock Central High School to Chuck Berry’s Gibson guitar, “Maybellene,” and the track shoes worn by Olympian Carl Lewis, the exhibition presents a living history that reflects challenge, triumph, faith, and hope.

The journey to establish this museum began long ago with a call for a national memorial to honor the contributions of African American Civil War veterans. After decades of efforts by private citizens, organizations and members of Congress, federal legislation was passed in 2003 to create the National Museum of African American History and Culture. Since then, thousands of artifacts have been collected to fill the inspiring building that has risen on the National Mall. Through its exhibitions and programs, the museum provides a shared lens to view the nation’s history and the possibility for hope and healing. It is a place where all can gather to remember, reflect, and embrace America’s story: a place for all people. For more information, visit nmaahc.si.edu.

SITES has been sharing the wealth of Smithsonian collections and research programs with millions of people outside Washing, D.C., for over 65 years. SITES connects Americans to their shared cultural heritage through a wide range of exhibitions about art, science, and history, which are shown wherever people live, work, and play. For exhibition description and tour schedules, visit sites.si.edu.

“Welcome to the Game: Human Trafficking in America” by Neosho artist Sarah Serio is on display now through March 2019 in our Bramlage and Wilcoxon Foundation Gallery.

Serio is a printmaker creating in traditional methods of hand-carved, hand-inked, and hand-pulled works. Her work focuses on and raises awareness about the millions of people world-wide who are victims of human trafficking.

“Welcome to the Game: Human Trafficking in America” is comprised of 12 reduction block prints, each layered with ink that builds a foundation upon which a narrative of those suffering from this violent and demeaning trade is told.

“I find that often the visual imagery used to bring awareness to the sex-slave industry is sanitized, such as showing a girl with a barcode and ropes around her wrist. My work strives to bring the harsh reality of this world to light,” said Serio.

Serio is a nationally exhibiting printmaker who received degrees in Fine Art and Graphic Communication from Missouri Southern State University. Her work has been exhibited in galleries in New York, Los Angeles, Chicago, Miami, and in Southwest Missouri.

A brief artist’s talk and reception will be held in the gallery on Thursday, February 21st, from 6:00pm-7:30pm.